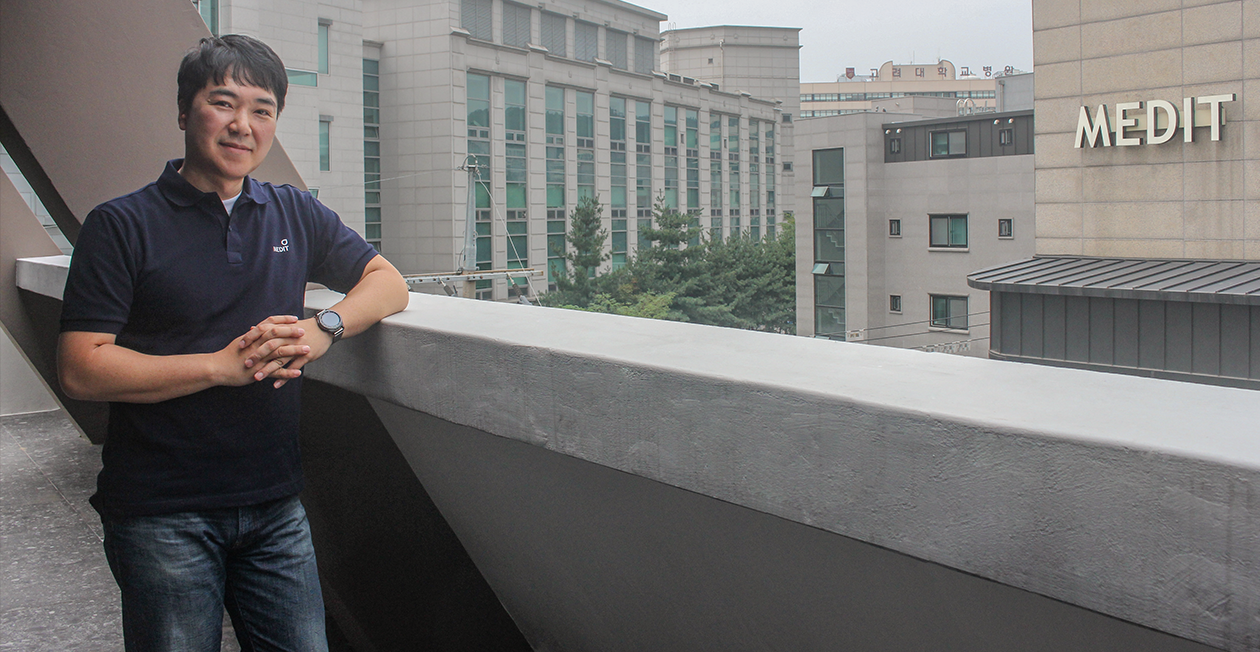 Michael Lee, Medit’s CTO, doesn’t sleep. This rumor has been persistent for a while among Medit users. But nothing would indicate tiredness as he sits down at his desk – surrounded by action figures and baseballs that have previously been stars of scanning demo videos – to talk about the innovation and development process at Medit.

“We develop all our core technologies on our own, without any outsourcing. This is what strongly characterizes Medit’s development process. A major advantage for us is that hardware engineers, software engineers, product managers, and decision makers work together in the same space. This allows us to quickly resolve any issues.” And it apparently also allows Medit’s R&D to react to user requests so quickly that some suspect a lack of shuteye.

Fast response to technical requests is at the core of the company’s stellar reputation for direct communication with users, who are often the source of new ideas, and considered integral to Medit’s innovation process. This customer focus sets the company apart from others. User feedback and suggestions are constantly monitored; at the center of this is Medit’s user community on Facebook with currently almost 7000 active members.

Given the amount of input, one would wonder how Lee prioritizes development tasks. “With simpler requests that we can develop easily, the quickest turnaround time so far has been one day. We develop it within a day and release a demo video the next day. With product improvements that require more resources, we prioritize development items based on the alignment with Medit’s strategy, the number of users they can benefit, as well as how often the feature was requested by users. Taking these factors into consideration, project managers will organize feedback and discuss with the development and sales team to determine the priority order. As the CTO, there have been instances where features are prioritized based on my own judgement as well,” Lee adds with a smile.

Medit has a reputation for frequent software improvements with the i500 intraoral scanner. However, long before intraoral scanning, the company had established itself in the field of 3D scanning and technology as a provider of industrial scanners, where accuracy and precision are of utmost importance. Almost two decades of experience were put to use when the company developed the Medit i500.

“We wanted to find out why intraoral scanners were not being used more widely, despite the many benefits and improvements they can provide in the area of healthcare. So, we tried out a few products and collected and analyzed the opinions of users. We then narrowed it down to four keywords – precision, usability, price, and openness. Our initial goal was to create a product which balances these four requirements. Before the Medit i500, such a product didn’t exist.” Lee outlined the thought process when designing Medit’s now highly successful intraoral scanner.

“While developing the i500, we thought a lot about what the dental industry would require after obtaining intraoral scan data. We realized that communication between dental clinics and labs was disjointed and collaboration techniques were not as advanced as in other industries. Cloud systems and one-click e-commerce technology are already common worldwide, and we wanted to make sure that dentists and labs could also benefit from them.”

And so Medit Link was born – a software bundled with the i500 intraoral scanner, featuring frequent updates and user-inspired innovations and improvements. The platform offers a flexible all-in-one workflow for dental clinics and labs. Users can perform 3D scans with the integrated scan software, manage all their digital data, process and complete orders and payments, as well as communicate seamlessly with partners and patients. Medit Link has recently been growing as a marketplace with additional add-ons, partner integrations and options to analyze 3D scan data – a lot of items on the to-do list of Medit’s swift development team as well as its CTO.

So, finally, we can’t help but indeed wonder – does Michael Lee ever sleep? “Of course,” he laughs. “My battery doesn’t last 24 hours so I need a few hours of rest a day to be fully charged.” That’s comforting to know! Especially, since we are sure that recharged energy will be put to good use in the next Medit Link update. The wait for it certainly won’t be long.